please redline this and give me tips

This section is intended ONLY for topics which are no longer relevant, but may be needed for future reference.
Locked Previous topicNext topic
8 posts • Page 1 of 1 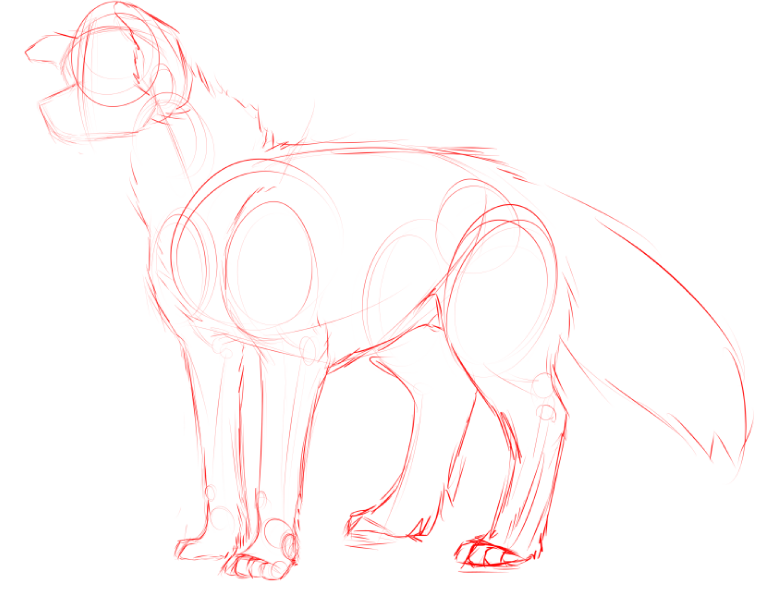 hmm i will edit!

EDIT; jk apparently I posted again LOL
0 x
not here much anymore. pm me if you need me.
Top

alright! so here's the image (sorry for my horrible writing skills LOL): just wanted to say that this is actually a great piece and as far as anatomy goes, i didn't find that much at all to redline.
i will sum up what i've done. i redlined more than the legs, i hope that's okay! there was purpose, i promise ^^
also keep in mind that i do have an anatomical style, i tried my best to match your own style while I did this :)

HEAD;
I pulled back the head a little and sized it up ever so slightly, because when I personally draw I find it to look more proportionate and "well set" when the head sits over or just in front of a canine's shoulder.
This also has to do with the way it's standing of course! Since this canine looks "squared up", which is a term I use when I show horses (they are standing with all four legs GENERALLY together, head relaxed), I tried to imitate that look, which is what this piece is showing me.

LEGS;
This also correlates with the "squared up" term I used for the head. You have that set, and the only things I really redlined were the shoulders, elbows and hips.
This didn't need much redlining at all, all I did was bring out the elbows a little to make them appear slightly thicker.
Because of the way the canine is standing, like I said, I didn't need to redline much, you had it spot on!

PAWS;
The reason I redlined the paws is because, for a feral, the back paws are rarely smaller than the front, they are the same size - and if anything, because of the angling, the front paws would look ever so slightly bigger than the back paws, which isn't necessarily the case. All I did was made the paws the same size, rather than the front paws being smaller than the hind paws.
I also pushed the front right paw up a little to match the angling (it should match up with the back right paw too, you shouldn't find a piece that has all paws on the same position, that would mean the right legs would be longer than the left!).

I hope that helps! sorry if I went a little overboard, I like helping and explaining as much as I can ^^ awesome piece!!
0 x
not here much anymore. pm me if you need me.
Top

thank you so much
this helped a lot
0 x Keep in mind that unlike humans, the spine connects to the skull of animals in the back. That means that their head will be farther forward and not sit on the neck like a shelf, if that makes sense. (:

That's true, thanks for correcting me Clov :D my style differs I suppose!
Glad it helped!
0 x
not here much anymore. pm me if you need me.
Top

Oh, sorry, it was definitely not intended as a correction! It's advice I try to give everyone because a lot of people struggle with it... I didn't even know about it before lol
0 x

Thank you for the tip. I live with pitbulls so I would use their anatomy but for what I'm working on they weren't help but thank you guys
0 x